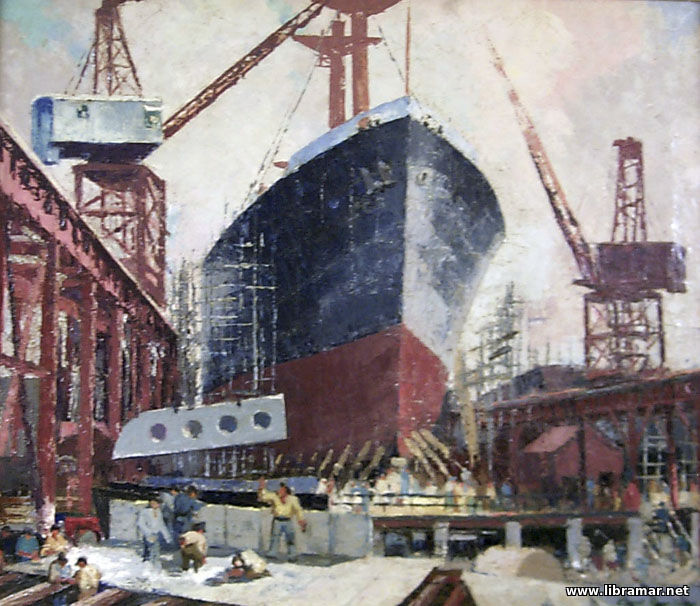 A major change in ship construction occurred over 100 years ago when steel was introduced to replace iron and wood as a hull material. Subsequent important developments in materials and ship construction were the all-welded ship and the application of concepts of toughness for the prevention of the brittle hull fractures experienced with the all-welded steel ships of the 1940's.

Over the past thirty years, many new designs have been introduced such as container ships, liquefied gas carriers, high speed surface-effect ships, and mobile and fixed offshore structures. To meet requirements for such designs, high strength-to-weight ratio alloys and alloys intended for low temperature service have been introduced into shipbuilding. The complex networks of intersecting members in offshore structures require that consideration be given to material properties when the applied tensile loads are perpendicular to the plate surfaces. The increasing size of ships, such as the VLCC tankers, and the concern for economy, stimulated automation of fabrication processes. 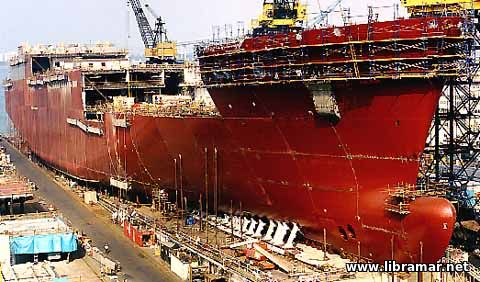 The relatively simple concept of toughness developed to answer the brittle fracture problems in ordinary strength steel hulls required refinement and extensive development before it could be applied to the newer hull materials and structures. For some structures increased consideration had to be given to such factors as fatigue and corrosion. Accompanying all these changes, was an increased demand for the designer to provide for quality assurance by nondestructive methods. To meet the challenges presented by these new developments, the designer had to become familiar with metallurgy, welding engineering, nondestructive testing, and the materials sciences. An appreciation of the basic principles of these fields will provide more efficient and reliable hull designs through selection of appropriate materials, joining, and quality assurance requirements.

The properties most commonly used for design calculations and material acceptance are determined from the tensile test. Specimens and procedures for tensile testing vary between different products, those described herein being applicable to hull steel plate. For other materials and for more complete requirements and details the reader's attention is directed to the American Society for Testing and Materials (ASTM) specifications K8 and A370 covering the test methods applicable to the specific material of concern. Typical rectangular 200 mm (8 in.) and round 50 mm (2 in.) gage length tensile specimens are shown below: 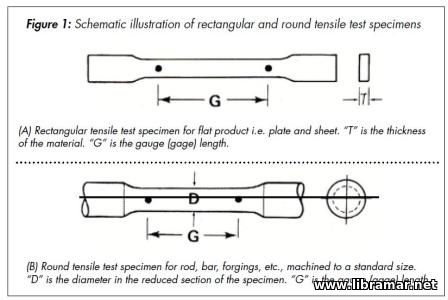 When a tensile load is applied to a specimen it produces a proportional amount of stretching or increased strain between the gage points. The maximum unit stress at which the strain remains directly proportioned to stress is known as the proportional limit. In the case of the commonly used ship steels, this stress also approximates the elastic limit, which is the maximum unit stress attainable without any permanent strain remaining upon complete release of the stress. Proportional and elastic limit tests are not usually required in production testing of structural materials.

As stress increases above the proportional limit, a given increase in stress produces a relatively greater amount of strain. In the case of the ordinary strength structural steels, a stress is reached where an increase in strain occurs without any increase in stress; in some cases a decrease in stress may occur as the material stretches. The stress at the point of increased strain without increased stress is designated as the yield point. Alternate methods for determining conformity to a yield point re- hull steel toughness to service performance. In addition, it is a rapid, simple and economical test that is accepted worldwide.

Studies of World War II ships indicated that plates having low CVN energy values were associated with catastrophic brittle ship fractures. The primary disadvantage of the CVN test is that it is only indirectly related to fracture mechanics concepts and cannot be used quantitatively in design. Also the significance of a specific test energy value varies for different families of alloys and strength levels. However, because of its advantages, the CVN lest is the principal toughness test specified for materials and welds in shipbuilding as well a in most structural and pressure vessel codes. The CVT specimen is supported as a simple beam and broke by a single blow of a swinging pendulum weight release from a fixed height.

In the Drop Weight Test, DWT, the specimen with a notched brittle crack start bead, is subjected at various test temperatures to an impact load from a falling weight. The highest temperature at which a crack forms and propagates to a specimen edge defined as the nil-ductility temperature, NDT. The NDT represents the highest temperature at which a material will exhibit brittle performance in the presence of a small flaw at low levels of applied stress. For normal strength hull steels, at a temperature approximately 33°C (<60°F) above NDT, applied stress must generally exceed yield strength for fracture propagation; at approximately 67°C (120°F) above NDT, fractures are fully ductile when tensile strength is exceeded.

The Drop Weight Test which provides a direct measurement of the NDT is often accepted as an alternate to the CVN test. Some of the factors that limit its use are:

• Test facilities are not as available as for the CVN tests;

• It does not provide information as to energy absorption;

• The background of service related experience is not as extensive as that of the CVN.

In addition, anomalous behavior may occur in a material which develops a tough heat affected zone at the edge of the crack-starter weld bead used in the test. The principal advantage of the test is that it can accurately establish the NDT on a wide variety of ferritic steels; this NDT is more directly related to design analyses involving fracture mechanics concepts.

The need to characterize fractures and fatigue crack propagation in terms of parameters which could be incorporated into design, analyses, such as stress and flaw size, has generated a variety of tests derived from fracture mechanics principles, number of such tests have been applied to ship structure research. Special fracture mechanics tests are particular useful for evaluating new hull materials or new material, applications where correlative data between the CVI properties and service performance is insufficient or unavailable.

They have been used for determining the applicability of candidate high strength-to-weight ratio steel, aluminum and titanium alloys, for predictions of crack growth in 9 percent nickel steel and aluminum for tanks in liquefied natural gas carriers, the estimation of crack arrest capabilities of various steels, and for some failure analyses.

The dynamic tear test, DT, has proven to be a convenient and useful test to characterize fracture behavior. The test measures the energy absorbed in fracturing a specimen, held at a specified temperature by a falling weight or swinging pendulum. A DT energy temperature curve for a hull steel and associated CVN.

Relationships have been developed between DT fracture energy values and the stress intensity factor, KId, for dynamic or impact loading. KId can be related mathematically to applied dynamic stress, crack geometry, crack size, and the configuration in the immediate vicinity of the crack front. Using the DT test energy at a given temperature, such as the lowest expected service temperature, the designer can then estimate the tolerable flaw size for structural members at an assumed dynamic stress; conversely the design stress level appropriate for an assumed flaw size in the structure could also be calculated.

This test in which a static load is applied to a type specimen can be used to establish a critical stress intensity factor, KIc; this factor can be used in static loading relationships in the same manner as Kid is used for dynamic loading. In addition to the foregoing, large-scale tests such as the explosion tear test, explosion bulge test and various notched wide plate tests have been used to study fracture.

Steel transition temperature increases with loading rates, and a steel which exhibits a ductile performance and high fracture energy absorption at a given temperature at a slow loading rate, may fracture in a brittle manner with little or no energy absorption with a faster rate of imposition of the same load. Similar differences in fracture performance are associated with increases in notch acuity. These factors should be taken into account in comparing results of different fracture toughness tests, and in projecting results of such tests to service performance. 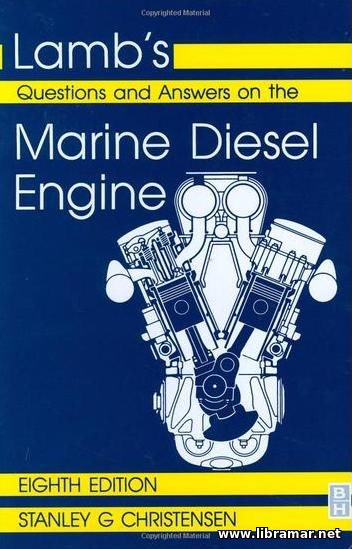 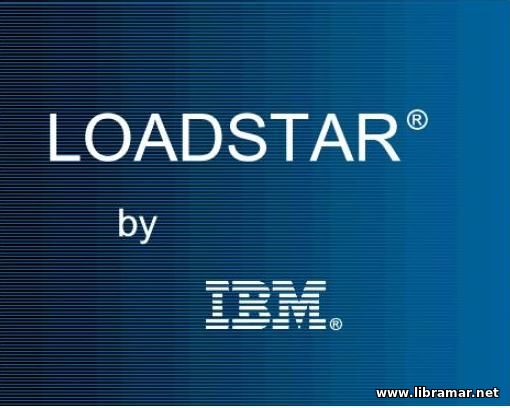 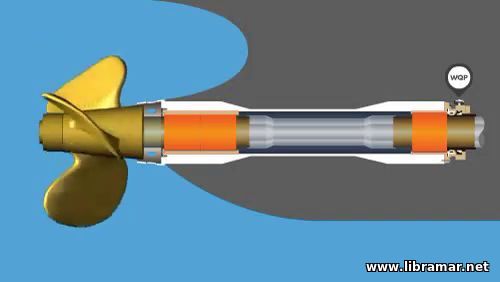